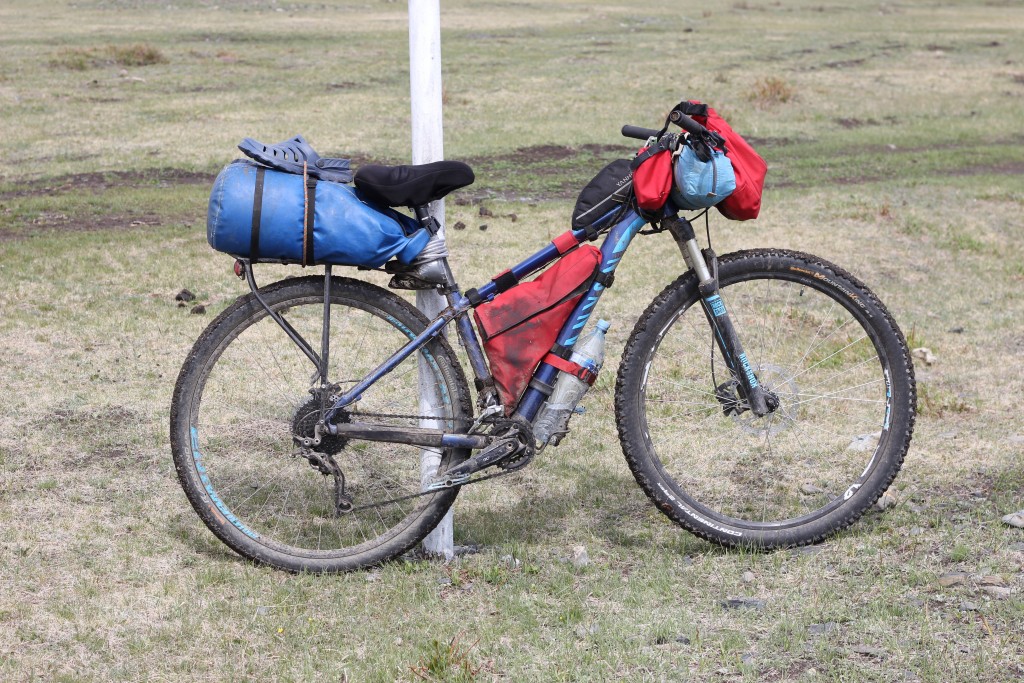 Before the trip I spent a lot of time researching what gear I should bring and considering how well everything worked out I think that was time well spent. I didn’t bring much that I didn’t need or use. I could have left a few items behind but overall, and especially considering we were unsure about what kind of weather we were going to have, I think I got it 95% right.

My bike, a low end Canyon hardtail performed faultlessly. I made a few changes with the trip in mind including swapping in a pair of On One Mary handlebars, I found straighter bars were giving me wrist pain and I instantly found these 25 degree bars much better, I installed very grippy flat pedals as I didn’t want to have to wear shoes with clips.And I added a 2.4 mud tire on the front and a thinner fast back tire. The front tire was great, tonnes of grip and very confidence inspiring. The back tire was grand, there was never any issues with wheel spin. To be honest for the couple of very steep or loose climbs I just walked. A bigger volume back tire might have been a little more conformable.
I removed the remote lockout for my front forks as I wanted to declutter the handlebars. I put a lot of pressure in the forks to stop them bobbing too much when I climbed out of the saddle and relied on the front tire to absorb the small bumps. I also removed the big chainring as I very rarely used it. I replaced the saddle for a more comfortable model and also took along a gel saddle cover which worked very well.

I designed and sewed my framebag, feedbag and handlebar bag. They were all a little rough and ready but served me very well. 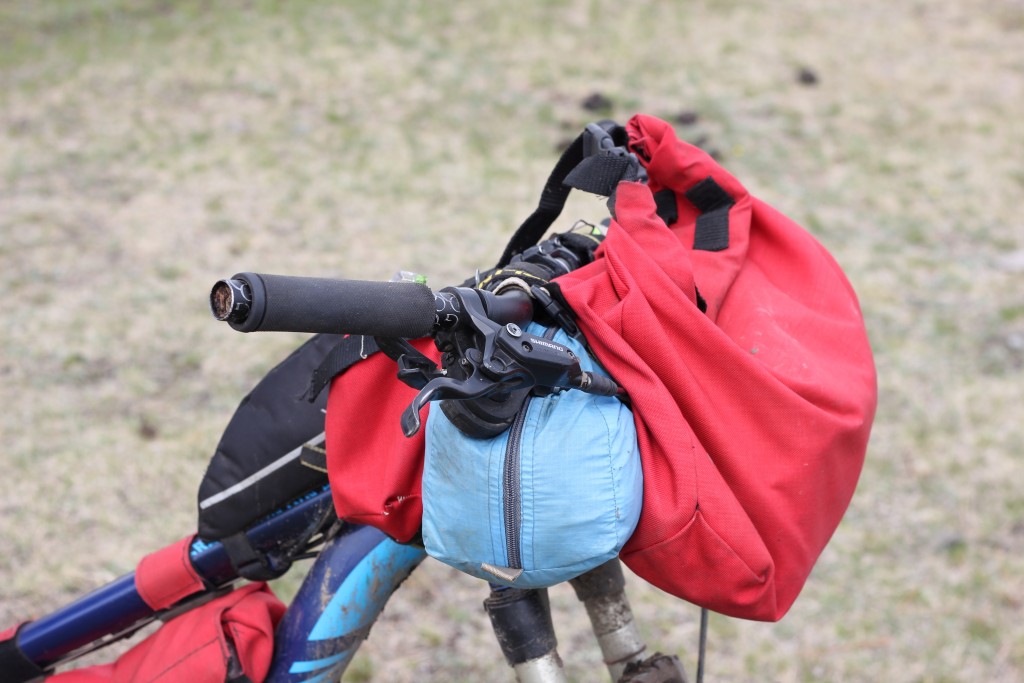 This was designed to hold my food. About 6 litres in capacity it initially held 6 days food. It has a rolltop closure reinforced with velcro and was mounted to the handlebars via a pair of straps – which also held my tent in place – and two short velcro loops. The idea was that as I ate my food I could still keep the contents packed tightly by rolling the top an extra turn. Threading the buckle strap under the stem prevented the bag from sagging and buzzing the front tire. The bag was heavy but felt very secure and didn’t effect the handing much. 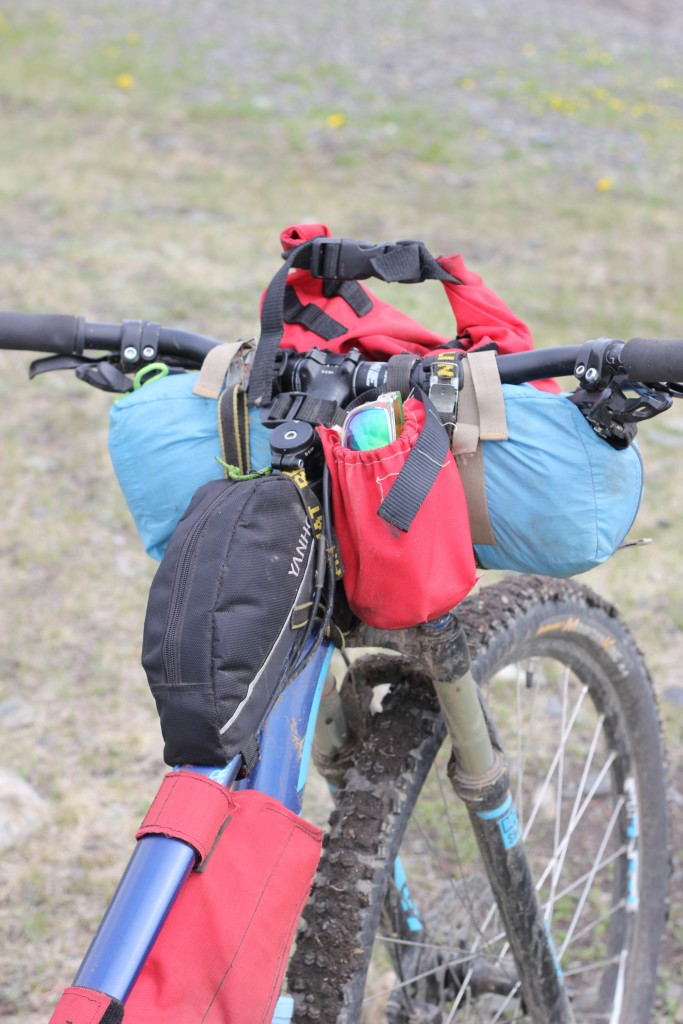 I just threw together a very basic feedbag that I used to store my gloves, sunglasses and sun block. It was very handy. Another one for snacks would have been useful.

I bought a 2 litre top tube bag from Alliexpress for the bargain price of €4 (also only £4.50 on Amazon). It worked perfectly and held all my tools and spares. One of the straps has started to tear but it will be easily fixed. 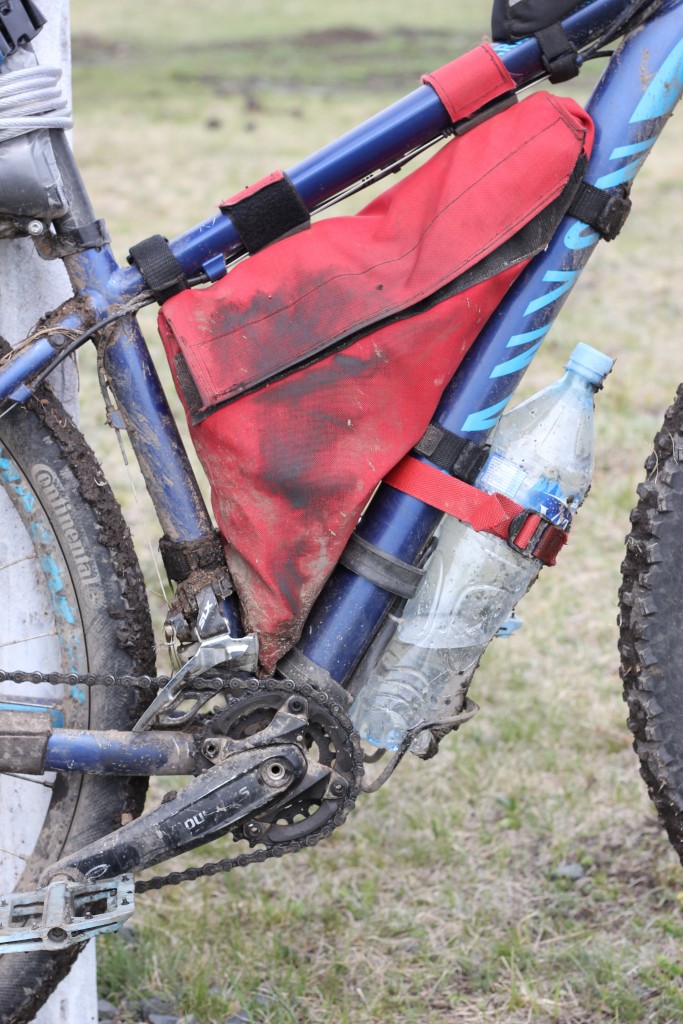 Worked fine. I kept my cooking gear and toiletries/first aid kit. As my bike is a size small there isn’t much space available, 3 litres maybe. This was the third attempt at making my own bag and while it wasn’t perfect it did the job, next time around I think I would go for a rolltop design that wrapped around the top tube with straps to compress it. 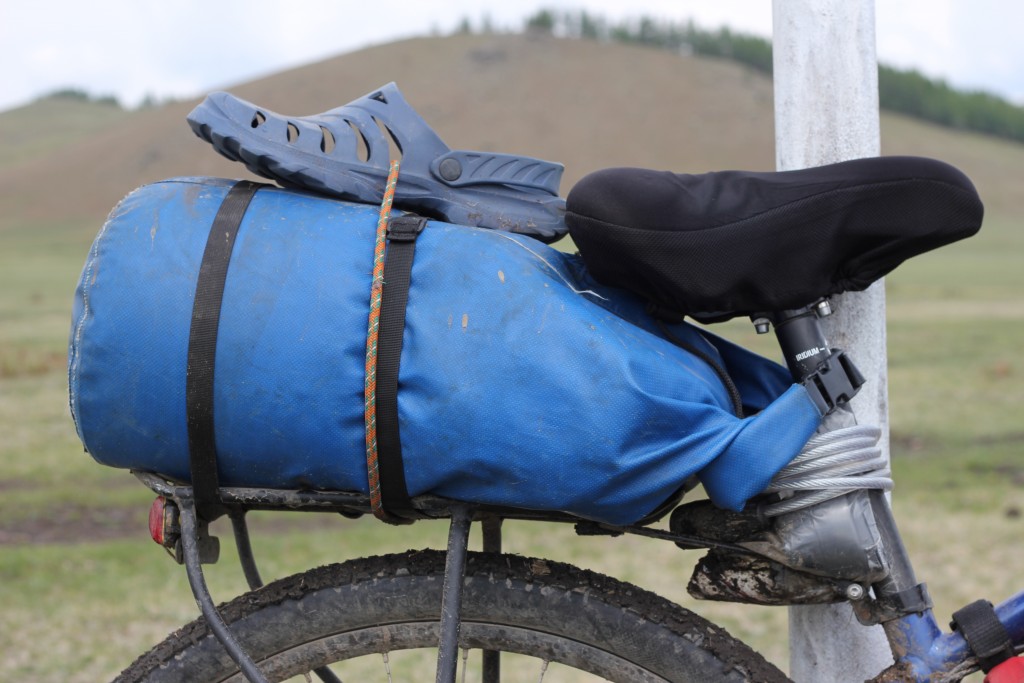 At the start of the year I bodged together a clone of the Porcelain Rocket Mar Fusion seatbag. It worked amazingly well holding the 13litre Alpkit drybag rock solid. Without a doubt this is the best design for a seatbag and I can’t understand why it isn’t more widely copied by the other manufactures. I used this system for all my training rides and it worked great, however with a few weeks to go I realised that the 13 litre bag wouldn’t fit everything I needed to take in it (sleeping bag, clothes, pad) so after messing around trying to make a larger drybag I decided to pick up a rack from Halfords and see how it worked (identical to this Topeak model on Amazon). For €33 I got a solid feeling, disc compatible rack. I attached a 20l drybag to this with some straps and after a few dry runs was happy that it would work well. And it was brilliant, the extra capacity took the pressure off packing and even gave me some spare space. The drybag was very robust and waterproof. The rack showed no signs of trauma and I checked the bolts every day but they stayed tight throughout. Having said this more of the ground we covered was fairly smooth and maybe on rockier terrain it mightn’t fare so well.

I was determined to have nothing on my back. In the end I took a very light 14l bag which I used to carry my extra water bladder. I also stashed my rain jacket there on showery days. It was a light load and barely noticeable and it was handy to have easy access to the water and jacket. The only time having a very light load on the back doesn’t work is when bushwacking, which we ended up doing a nice bit of. The extra weight on the bike makes it very unwieldy and it would of been great to be able to carry the drybag on my back. So maybe next time I would consider using a drybag with some basic shoulder straps. 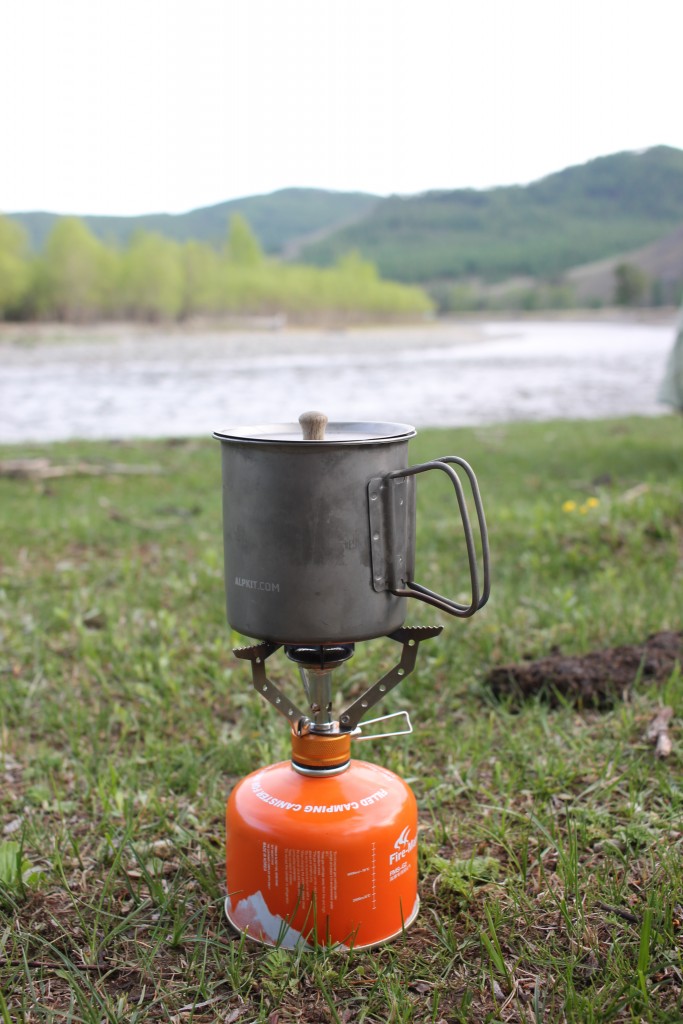 I took a Vango compact gas stove and one 230g cannister which I only ended up using half of. We had fires some nights and cooked on them. Overall I’d estimate I used the stove (just to boil water) a dozen times. We weren’t sure about what fuel to bring but were able to buy gas in Seven Summits in UB. My pot was a small Alpkit titanium mug which was the perfect size. A striker, a plastic fork and half a sponge travelled in the pot.

I invested in an Alpkit Pipedream down bag before the trip, I hadn’t used it much so wasn’t sure how warm it slept and also wasn’t sure how cold it was going to be so it was a bit up in the air. Turns out it was quite chilly, there was frost on the tent on the clear nights. The bag was warm however I was glad that I brought along a silk liner as insurance. I ended sleeping most night in all my spare clothes including rain jacket.

For a pad I used an Alpkit Numo, it’s very light and compact and pretty comfortable but isn’t that warm, after the first night when I felt the cold seeping up through the ground I lay my drybag, bike shorts and rucksack under it, which helped quite a lot. I usually bring an inflatable pillow camping and I briefly considered leaving it at home to save a little weight but I brought it on the basis that I wouldn’t probably end up wearing all my clothes in bed and thus wouldn’t have anything to improvise a pillow from. 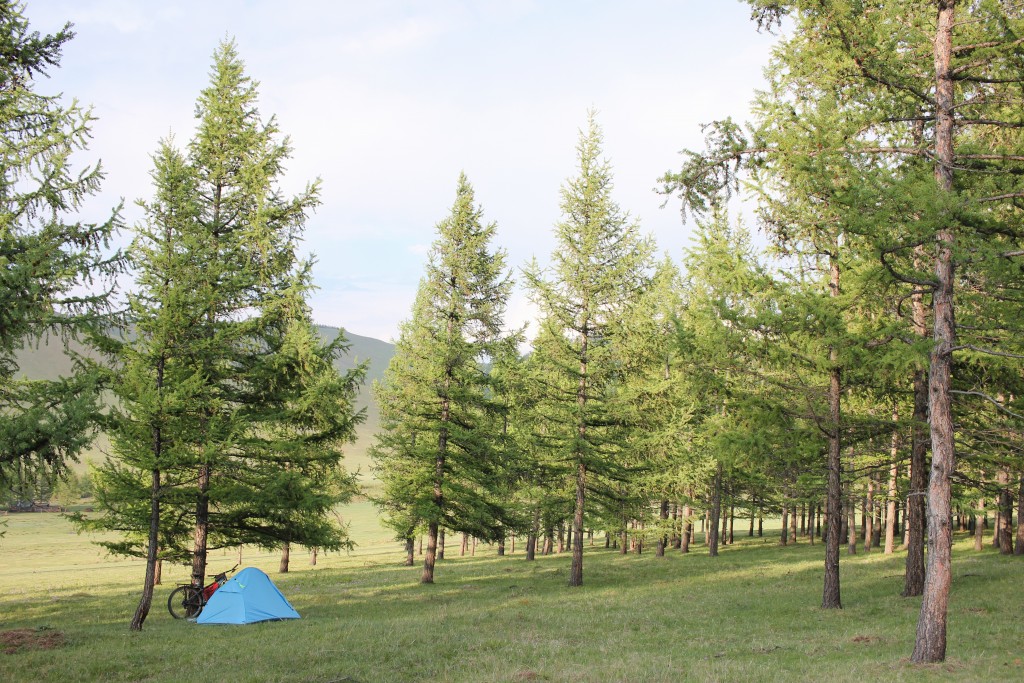 I took a one person Naturehike tent that I picked up on Alliexpress for €54, at that price I reckoned it was worth a go. It’s brilliant, light (1.1kg) and very compact, small but with good living space. I’ve used it in the rain a few times and it seems very watertight. This is the model I used and can recommend, a friend has this one and it looks great as well.

I didn’t take much in the way of spare clothes. I wore very light trousers and took a pair of very light running shorts as well as two pairs of padded shorts (one would of been enough) and a pair of tights to sleep in. I wore a 20 year old Lowe Alpine long sleeve base layer and a short sleeve one as a spare. Brought two pairs of cycling socks and one pair of boxers (which I never wore). A cashmere jumper and a very light down jacket were my warm layers, I could have done with a slightly heavier down jacket.

My rain jacket was a well worn Marmot jacket that I washed and reproofed before the trip, the reproofing added great waterproofness and was a much better option than buying a new jacket. I didn’t bring rain trousers and just about got away with it. They would of been nice if the wet days had been a little colder. For a hat I took a fleece balaclava which I only wore in bed. Gloves were light padded riding gloves which I only work on the faster sections. On the wet days my hands got cold.

On my feet I wore a pair of fairly beat Five Ten Guide Tennies, they were grand, very slow to dry, which considering there was so many river crossings was a pain, shoes with very light uppers would have been better choice. I also took Crocs for the evenings, worth carrying I think, it was always nice to change shoes in camp.

I took my phone and three battery packs which we never used. As Michael’s phone was waterproof that was the main phone for navigation, I only turned mine on once or twice when we had wifi. He also had a solar panel which charger the phone pretty quickly on the sunny days. I took a Petzl Tika which saw little use as it was bright until 10.30 in the evening. My Kindle Paperwhite was critical, we did a lot of reading.

I took my DSLR with about 100g of cards, only took 500ish shots – about 16g worth. I had two spare batteries, could of got away without them easily. And a small tripod which I used twice, once for a timelapse and once for some astrophotos. Wouldn’t bother with it next time. I had two fixed lenses, a 24mm and 50mm, both were great and all I needed. I took along a small cable lock and used it once or twice but it wasn’t essential. I carried a water bottle on my down tube attached to a rack which was held in place with hose clips. 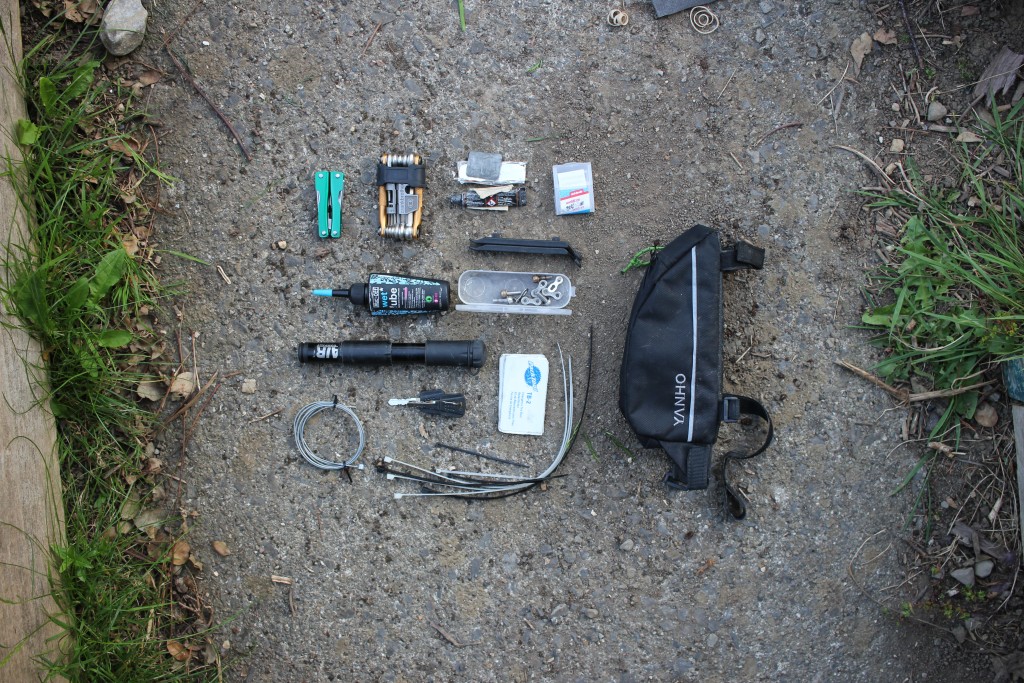 I took a fairly comprehensive tool kit and thankfully never need any of it. 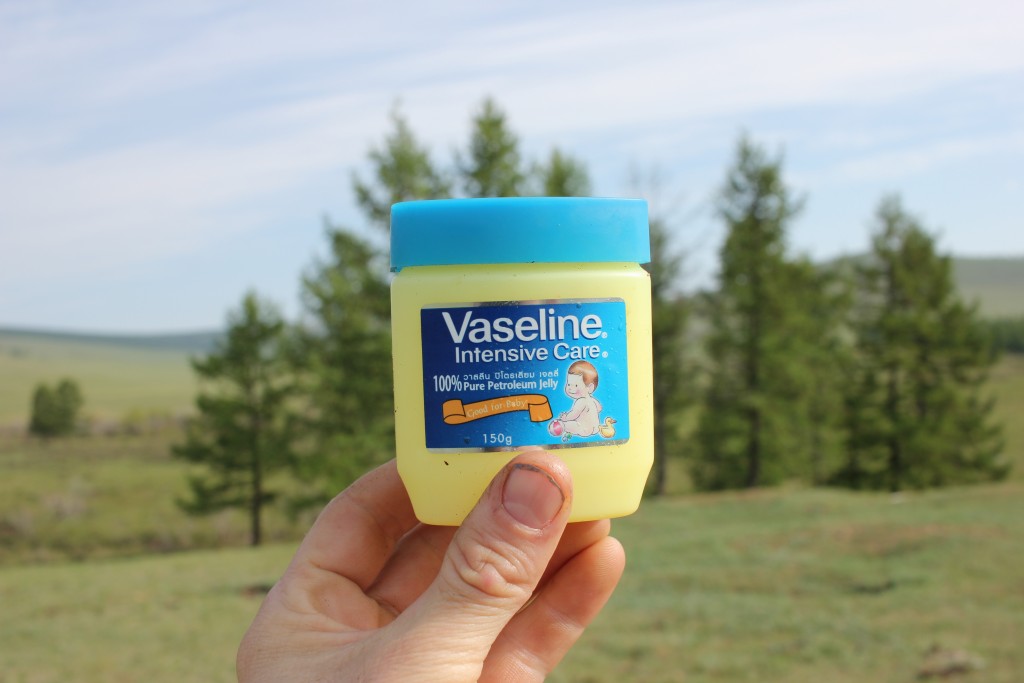 Took a selection of plasters, painkillers, wet wipes, toothbrush and paste, chamois cream, sunblock. I bought a large tub of vaseline along the way which really helped with the chaffing, in future I would only take vas and leave the chamois cream at home. Never need the insect repellent or midge net thankfully. Used tablets to purify the water just to be on the safe side.