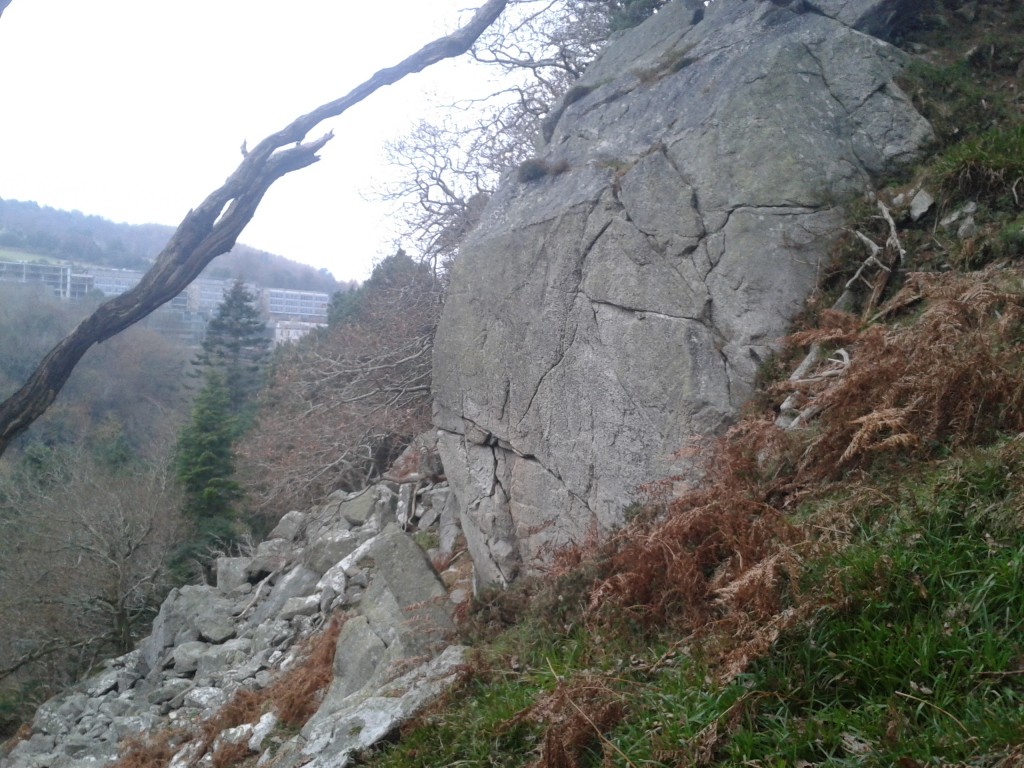 Ask your Da or Uncle to name a climbing route, not a mountain but a specific route, and I bet you they will think for a minute and offer The North Face of the Eiger. It’s probably the most famous climb in the world. In 1938 a pair of German and a pair of Austrian climbers set out, independent of each other, to climb it. Halfway up one of the Austrians (Heinrich Harrer of Seven Years in Tibet fame) realised that he had forgotten his crampons and as a result the two rival teams decided to join forces and went on to complete the first ascent.  If it wasn’t for this, frankly moronic, oversight they may well have failed leaving the prize of the Nordwand to others.

At the weekend I had my very own Harrer moment. I have been working a highball in The Scalp over the last few weeks and had arrived for another quick session. As I was setting up the rope I realised that I had forgotten my harness. In the two previous visits I had worked out the moves but I hadn’t done it in a oner yet, in spite of this I decided rather than just go home without even pulling on, that I should at least do the starting moves.

The problem lies on the east wall of Quartz Crag, one of the bigger buttress in The Scalp, high up on the east side of the valley. The wall overhangs slightly and the lip is about 15 feet above the ground which is rocky and drops away alarmingly.

I tried the route once in 1998 and for some reason it popped into my head again recently. The Scalp is a good spot for a quick visit and it’s always interesting to work on something new. The first session I gave the holds a clean and figured out a sequence, there was a move in the middle that I could do but it felt a bit desperate, the rest felt ok, next visit I figured out a better method for the crux but I still wasn’t siked on climbing it without a rope. A few pads and spotters could make it possibly ok to fall off but it would be very hard to drop the last move and not risk getting hurt. Don’t get me wrong it’s not a route, just a highball, you would be very unlucky to die falling off it.

I intentionally hadn’t done the route in a oner, I wanted to save this for when/if I did it ropeless, something of a carrot.

Last Sunday, it was very cold but I had done a good warmup on the fingerboard at home so when I pulled on the holds felt good. I did the first two moves and reversed (it’s not the kind of problem you want to drop off and I had no pad). That first go has felt good. I’m sure it was in the back of mind that I should just go for it.

I spend a few minutes looking at the landing, trying to figure out where I could fall or drop off safely. I knew I couldn’t reverse once I had done the first few hand moves.

With no plan crystallised I pulled on, the holds felt great and lead me upwards so I did the move to the jug – static, I previously was doing it as a slap – and – committed now – I pulled through the rest of the problem to the top. It felt great to climb it free from the annoyance of the rope. I let out a little whoop at the top and let that all too rare feeling of accomplishment flow over me (there was a bit of adrenaline as well). I decided to tempt fate and did it again, it didn’t feel as easy or as flowy but it was still good.

So it’s called Safety Second, giving it 6a but it’s hard to tell.