The true hidden gems of the Wild Atlantic Way – Donegal

In this post, the first in the series about the Wild Atlantic Way’s hidden gems (the others include: Mayo, Galway, Cork, Kerry, and Clare), David Flanagan (co-author of Exploring Ireland’s Wild Atlantic Way) takes a look at county Donegal.

Tucked away in the northwest of the country is the vast country of Donegal. It really is huge, to drive from Inishowen in the northeastern corner to Glencolmcille in the southwest will take you at least 3 hours. Of course, this means there is a huge amount to see along its coastline as well as in the rugged mountainous interior.

The sheer size also means there is huge variety, particularly of landscape. The huge quartzite cliffs of the south west give way to the sandy coves and small granite bays peppered with tiny islands. To the north the jagged coastlines rears up again culminating in the heroic cliffs and inlets of Ireland’s most northerly tip at Malin Head

Donegal has its share of world-renowned attractions such as the cliffs of Slieve League and Malin Head – now famous as a Star Wars location. However it isn’t quite as geared up for tourism as the likes of Kerry and Galway but this can be definitely taken as a positive. You are more likely to find calmness and serenity on Donegal’s empty beaches and quiet roads than anywhere else along the Wild Atlantic Way.

At the very end of the Glencolmcille Peninsula at the western tip of Donegal a network of narrow roads leads through the mountains and down to the sea. The road ends at a small pebble beach and on either side grassy hills and huge soaring cliffs rise out of the water. This is the remote townland of Port, once home to a small fishing village, it has lain deserted since the Famine. The beautiful cove is the only breach in the long line of huge cliffs that run between the village of Glencolmcille in the south and Adara to the north, the most remote stretch of coastline in Ireland. It’s possible to walk the grassy clifftops in either direction and admire the amazing rock architecture of massive sea stacks, arches and steep cliffs beneath.

There is an off-grid cottage just above the beach that is available for rent.

The small island of Gola lies 1.5km off the shore of north west Donegal. Now uninhabited it was once home to over a hundred people. Beautiful and unspoiled, the island is popular with walkers, birdwatchers and climbers. The eastern side of the island, where the cottages and pier are found, has white sandy beaches, while the western side is more rugged with granite cliffs, narrow bays and sea arches.

The Seod Gabhla (087 6607003) makes the short crossing from the small pier at Magheragallon, just west of Bunbeg, regularly during the summer months. There is one house for rent on the island, Portacrin Cottage. The only other option is to camp on the grassy ground between the lake and the beach on the western side of the island.

A 4km signposted walk loops around the island. Slí Gabhla starts at the pier and follows the sandy roads in a loop around the eastern part of the island. It’s well worth making a diversion to the western coastline. The view from Mweelmore, the highest point on the island is wonderful.

While researching Exploring Ireland’s Wild Atlantic Way I stumbled across this fascinating piece of history completely by accident. Truly a hidden gem you won’t see any signposted or information boards here. Lying on a small rocky headland just past the northern end of Lenan Strand, the fort was one of seven defensive forts built by the British in 1895 to defend the deep-water anchorages of Lough Swilly. The gun positions, which are linked by extensive underground passages, are still in remarkably good condition.

It is a fascinating place to explore and has a very empty, eerie feel. If you want to check it out remember to bring a torch and be very careful as there are some uncovered hatches.

From Lenan Strand continue north along the road to a junction. Turn left and after 650m is a right turn. Take this and follow the rough, pot-holed track to the fort.

If you are interested in military history then Dunree Fort just to the south is also well worth a visit.

The first time I visited this beach was on a wild and windy autumn day. There was a huge surf crashing into the sand dunes. It was fair to say I was – literally and figuratively – blown away. Five Fingers is one of Donegal’s most beautiful beaches, and is the ideal spot for an invigorating walk on a wild day. The beach, which takes its name from the five sea stacks at its northern end, is backed by massive sand dunes, some of the largest of their type in Europe. The wreck of the Twilight, which sank in 1889 en-route from Newfoundland to Derry, is visible at low tide beneath the cliffs.

Be aware that the beach is unsafe for swimming due to very strong currents.

You will find the beach just off the Wild Atlantic Way (R242) between Malin Village and Malin Head. The road down to the beach is very narrow and there is limited parking so it’s best to park at the church and walk the rest of the way down. 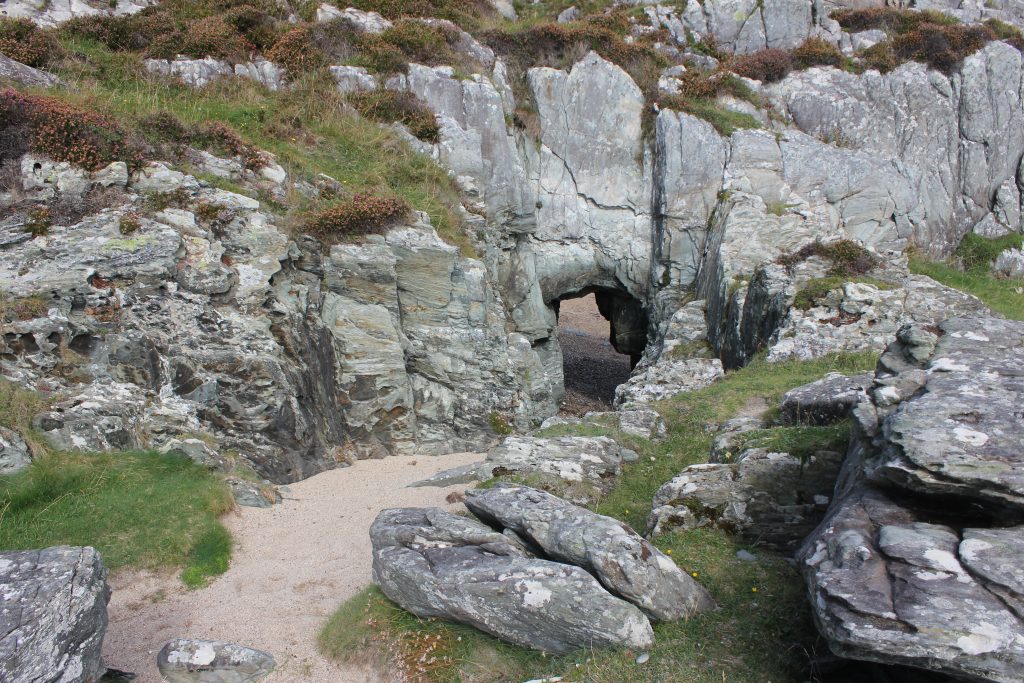 Stroove is hidden away at the northeastern corner of the Inishowen Peninsula. This small Blue Flag beach is the starting/finishing point for two interesting walks. The first, the Inishowen Head Walk is an 8.5km signposted loop that follows rough roads and gravel tracks across the hillside above Inishowen Head. There are some wonderful views, and on a clear day it’s possible to see Scotland. Follow the purple arrows.

The second walk visits a curious piece of geology known as Port-a-Doras. From the carpark at Stroove follow the road north. Where the road swings around to the left is a signpost and beside it is a small gate, go through the gate and walk down along the edge of the field to the sea. You then follow a vague path, rough in places, along north along the shore. After about 15 minutes you will arrive at a large outcrop that appears to completely block the way forward. However, there is a small, natural doorway in the rock that leads to a hidden pebble cove. This is the door, or doras in Irish, after which the area is named. Hard to believe it was created by wind and waves!