Indian Summer on the Island 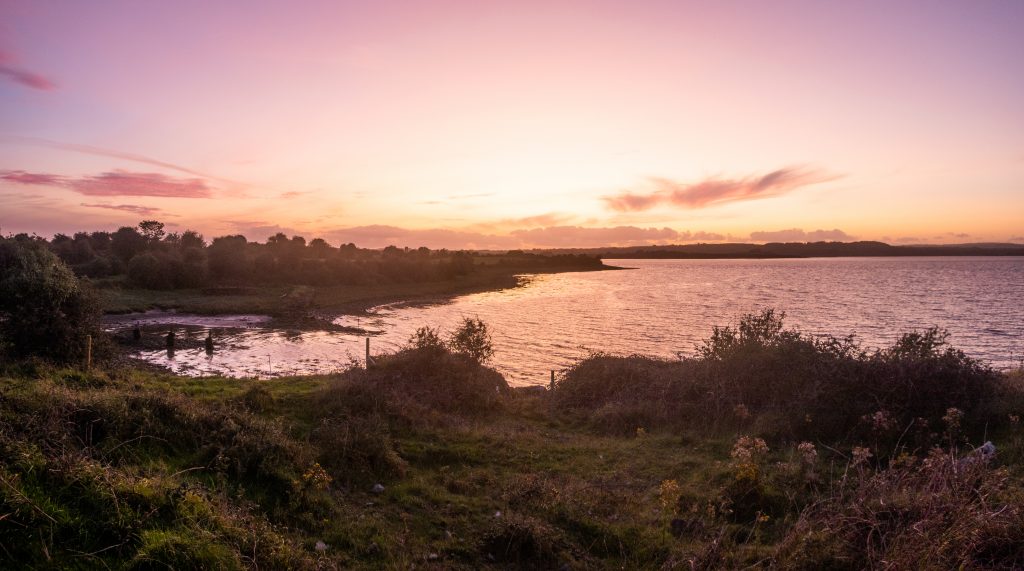 Five of us spent two nights on the island, managing to time our trip to coincide with last week’s spell of sunshine. With no urgent tasks we took it easy and made the most of the fine weather.

As high tide fell very early in the morning and in the evening we had a leisurely journey down to Clare last Thursday. The plan was to get on the water during the afternoon so that we could just land on the island around mid-tide. With all the variables – wind, current, pressure, tide – it’s hard to know exactly what’s going to happen but in the end we had an uneventful crossing. The wind was breezy but the water was calm and we weren’t too heavily loaded with tools or building materials. That said we still had two days food for five, a 25kg bag of lime, 25l of water and a good amount of beer.

The aforementioned variables mean that landing on the island always feels like a small victory, you can’t take it for granted. A few weeks previously we had been all set to go but the forecasted wind was too strong and it could have been a few days before we would have been able to get back to the mainland. 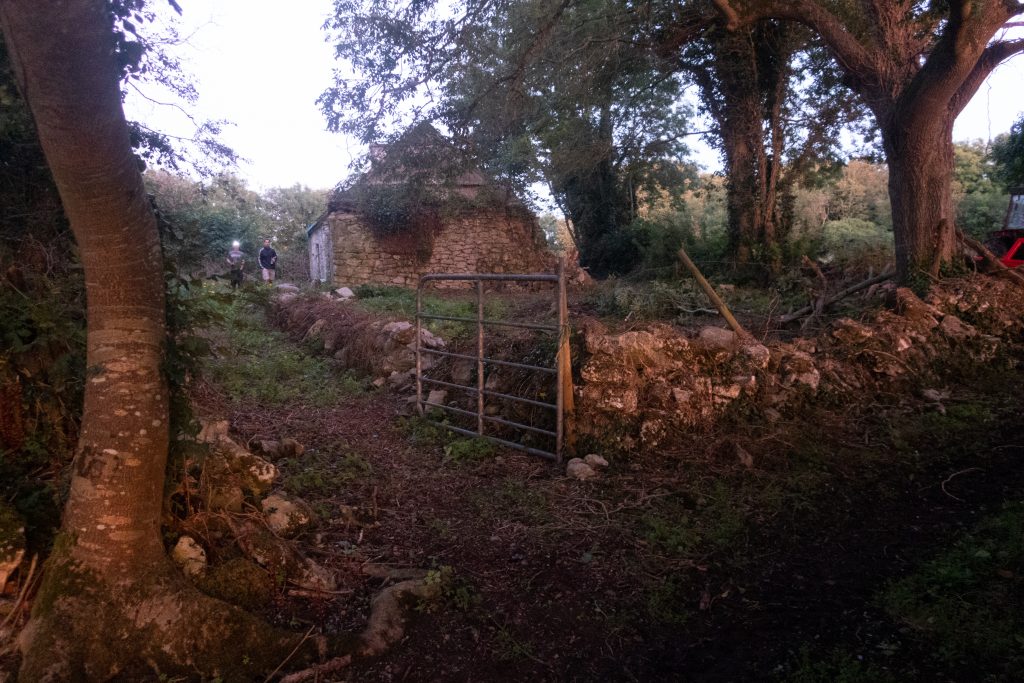 Another source of uncertainty is the state of the cottage. I always worry that we will be greeted by a pile of rubble but everything was in order but the roof hadn’t budged since we propped it and the vegetation was under control. 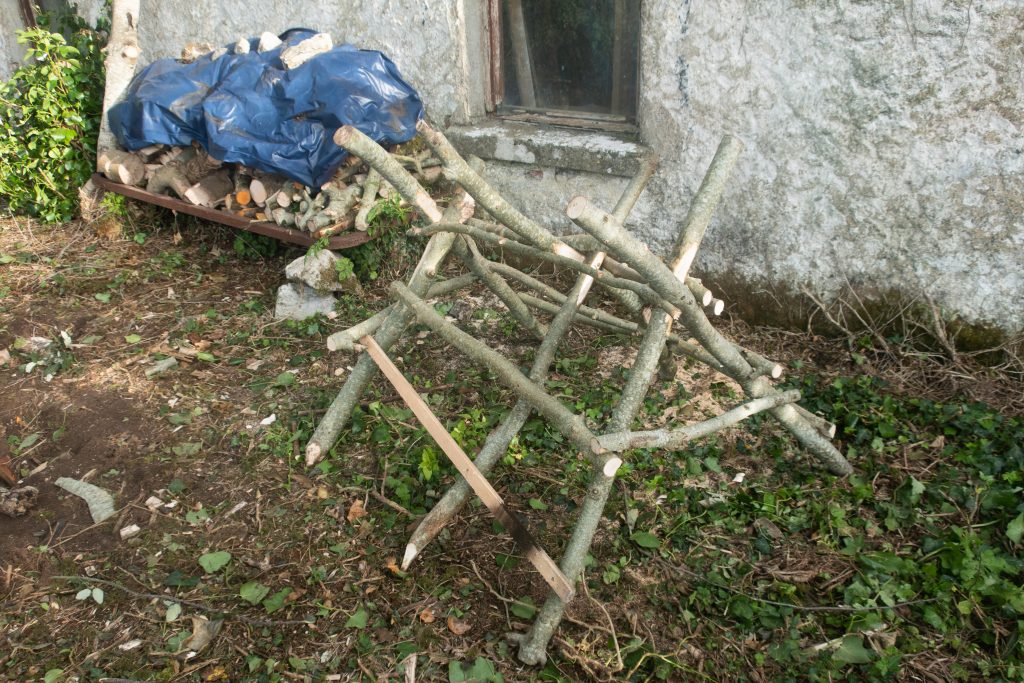 As we were planning to restock our firewood Marius and I immediately got stuck into building a sawbuck – a trestle for sawing logs into sections. Using the curved branches that lay around meant it wasn’t ever going to win any beauty contests and the critical thing was that it was solid. Ultimately we ended up with an over-engineered and functional, if pug ugly, device.n

That evening I left to collect the other two from the pier. Paddy and Foxy were visiting the island for the first time and it was great to experience the place through their fresh eyes and for them to see the island on its best behavior.

The water was blowing from the NW and with a long fetch it was making quite big waves in the bay on the northside of the island, never seen that before. After a bouncy start the water calmed and we collected the lads and had an easy trip back as the light faded and the wind dropped. 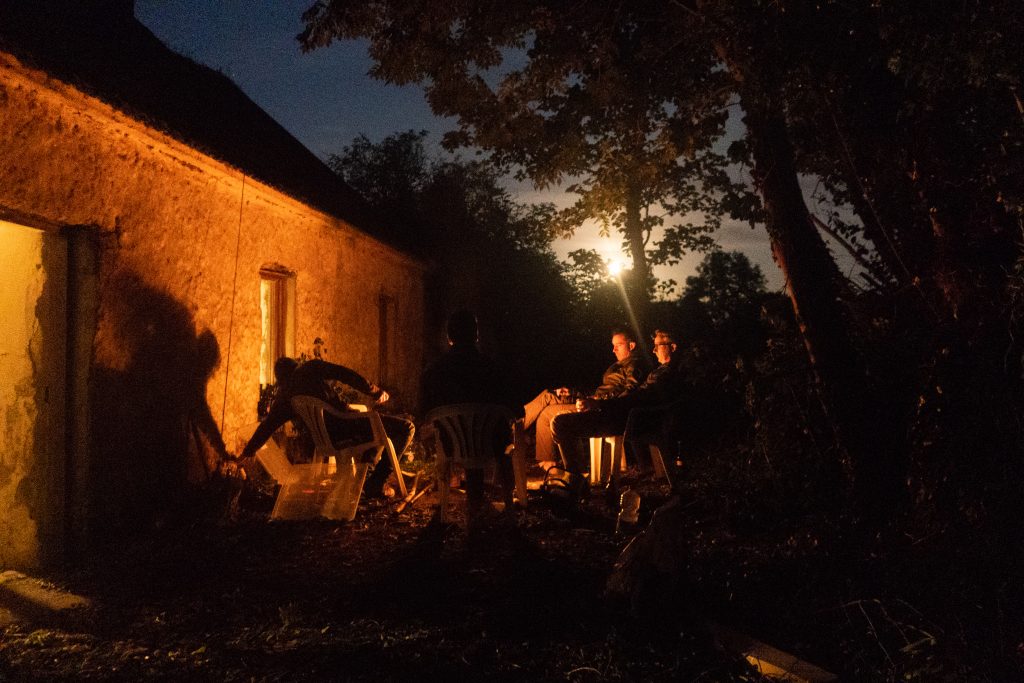 With a full moon and no wind we brought the fire pit outside and enjoyed plenty of beer plus the mandatory 11 o’clock spooky wander around the ruined cottages. (The fire pit is a recycled tumble-drier drum. In the past it hasn’t burnt that well. When the flames falls below the lip it becomes starved of air and struggles to burn well. This time we put a layer of rocks in the base, this made a good difference by raising the fire higher and adding some thermal mass.)

The next morning the weather was perfect: dead still and warm. The first job was to clear some of the ash trees growing in front of the southside of the house. The edge of the plot is close, 3m maybe, and the boundary wall has a line of trees, mostly ash but some hawthorn, that are shading the house and dropping a lot of leaves and debris on the roof. Some are tall and lean towards the house so we passed on those ones and felled a few of the easier trees. After a morning of work that passed with only minor incident we had a small number of logs ready to be bucked and split.

Unfortunately, the chainsaw we brought over didn’t want to start so we resorted to the large bush saw, which is pretty effective, and throughout the day we took turns sawing and splitting. The sawbuck making life a lot easier. 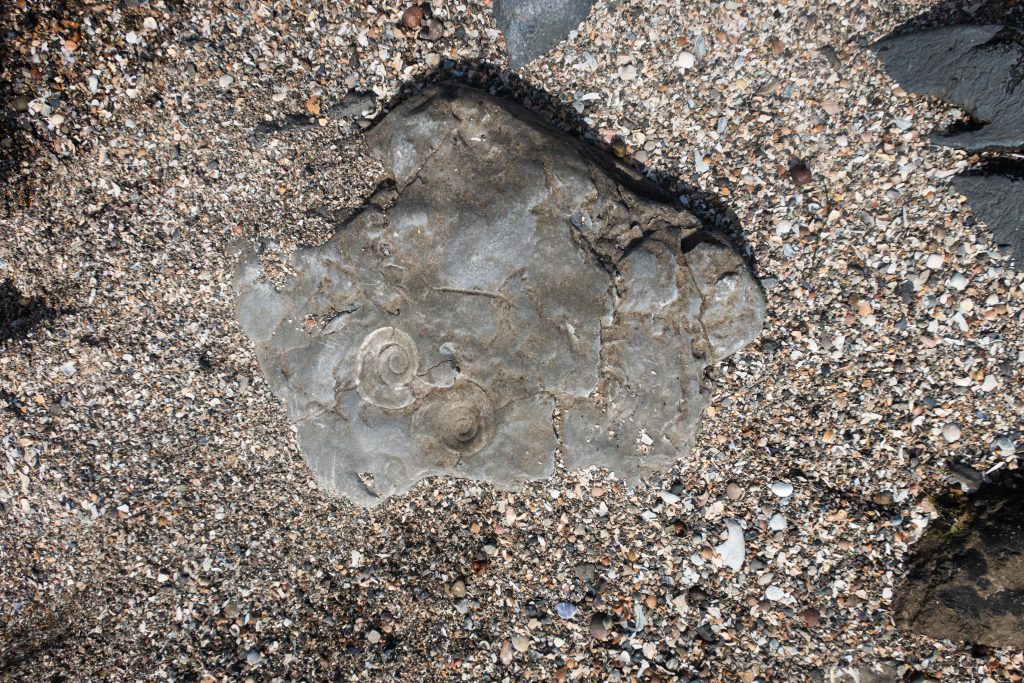 As the afternoon went on our focus slipped and the breaks become longer, but after so many days of toil on the island I’m always happy to take it easy and explore so we went for a wander. Passing the schoolhouse we salvaged a few lovely slates and then headed south to the beach where Paddy pointed us in the direction of a cool double spiral fossil he had spotted. 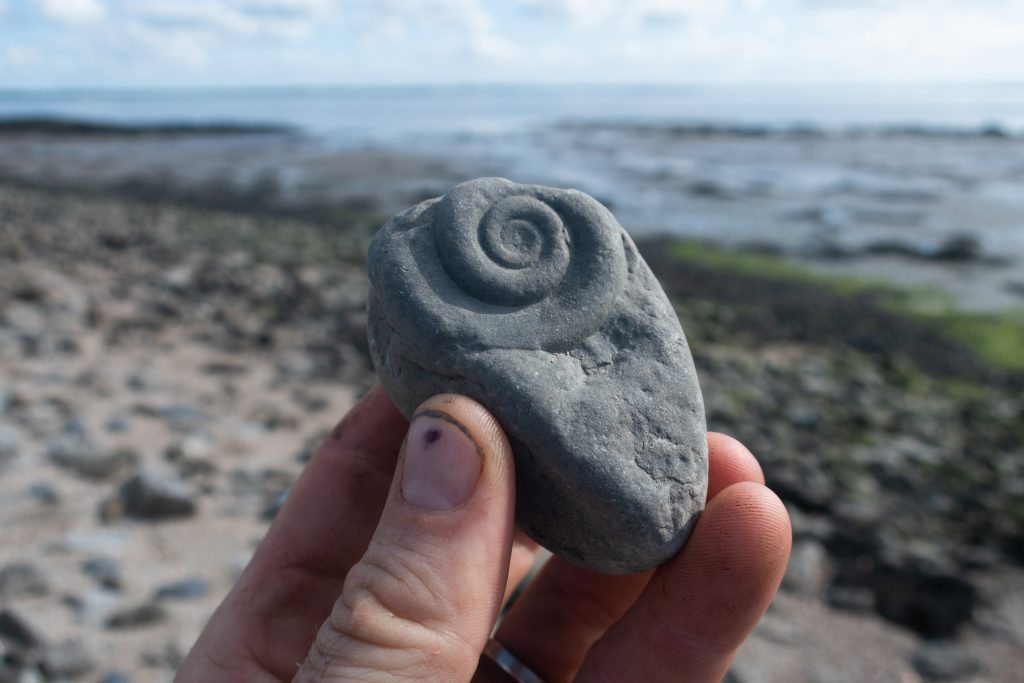 We then spend most of an hour soaking up the sun and searching for more, with Foxy finding a particularly nice sample. 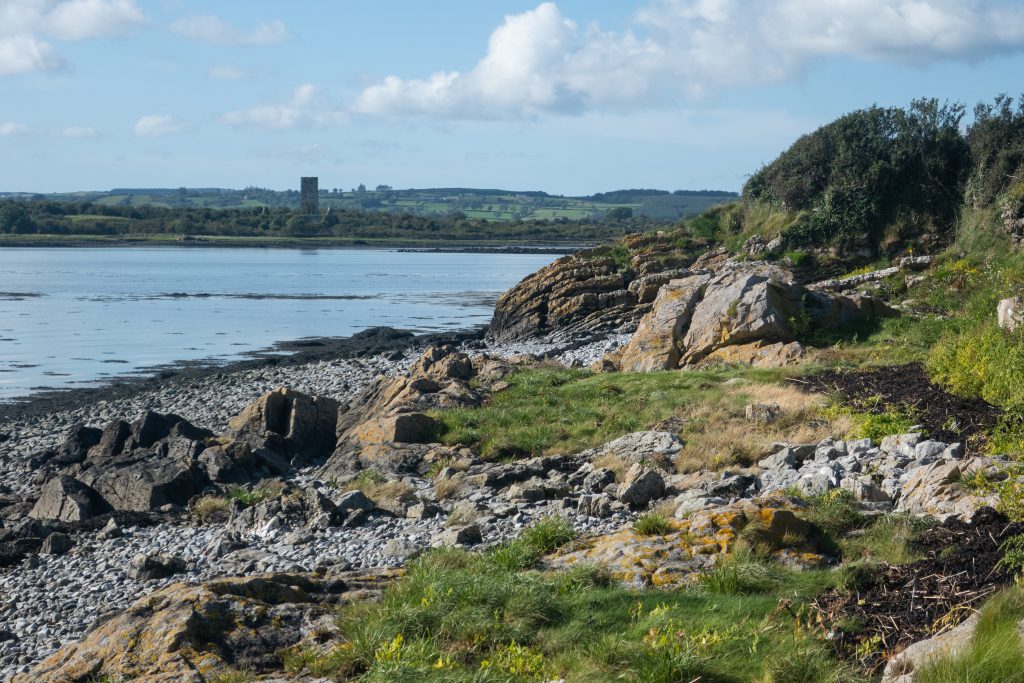 That evening we took the boat over to Canon Island and wandered around the Abbey. It’s hard to appreciate the size of the place from the water. The main tower is at least six storeys tall and there are a huge number of buildings. It’s a really impressive place and if it was on the mainland I’m sure it would be very popular with tourists. Yet its location makes it even more interesting and unique. The islands certainly are a hidden gem, easily and often overlooked but have great scope for adventure and heritage tourism. 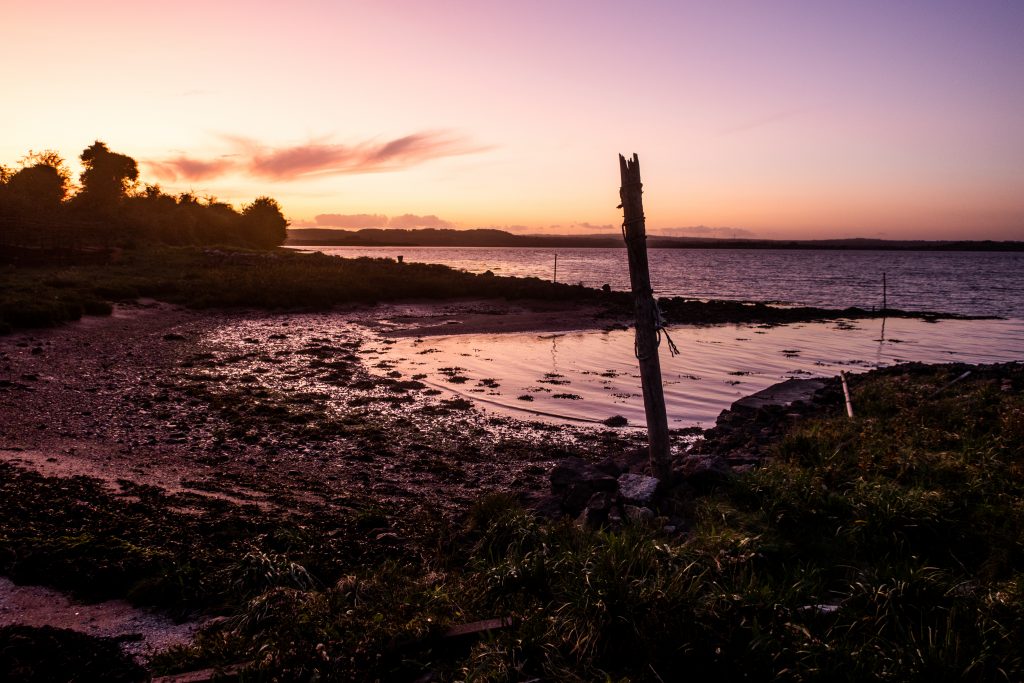 A nice sunset signaled that the good weather was going to continue and sure enough the next morning was perfect: warm and calm. After breakfast and a quick tidy we left the island at around 10.00. The boat did well with five people but not much gear and as we pulled up to the pier we were lucky enough to spot a kingfisher perched on the railings, a nice way to end the trip.