I had never considered the role of handedness in climbing until I encountered the mirror board in the training room at Awesome Walls Dublin. A mirror board is a steep board (in this case with an adjustable angle) covered in a symmetrical pattern of holds. This configuration make it possible to create pairs of identical, symmetrical problems. After a session on the board I found that moves which felt reasonably straightforward on my good side were impossible on my bad side.

For me this asymmetry was most evident on deadpoints to holds that require a lot of precision. On my bad side these move felt very awkward and I don’t think the issue was just to do with latching the hold, the whole movement just felt a little weird.

I was amazed at how asymmetrical my ability was.  I can rule out strength as a factor as my fingers are very even strengthwise (as measured by deadhanging on one hand) and there is only a minor difference in my arms (as measured by how long I can hold a one-arm lock off). So I believe that the problem comes down to technique.

The vast majority of people have a dominant hand and in normal everyday life this doesn’t create problems, in fact it’s probably a good thing, you are able to play with your strengths. And as you aren’t forced to hit every second shot in tennis with your bad hand, you don’t write every second note with your bad hand there is no issue.  But in climbing this isn’t the case. Broadly speaking you will encounter just as many moves that should be done with your left hand as your right.

Granted it’s often possible when confronted with a hard move with your bad hand to adjust the sequence so that it can be done with the good hand.  Exercising a preference for a particular hand will just re-enforce that preference as the better hand improves further while the bad hand is neglected. This bias is probably most obvious when you examine problems that you set at the wall or on your home board, on my board nearly every single problem’s hardest move is a throw with the right. 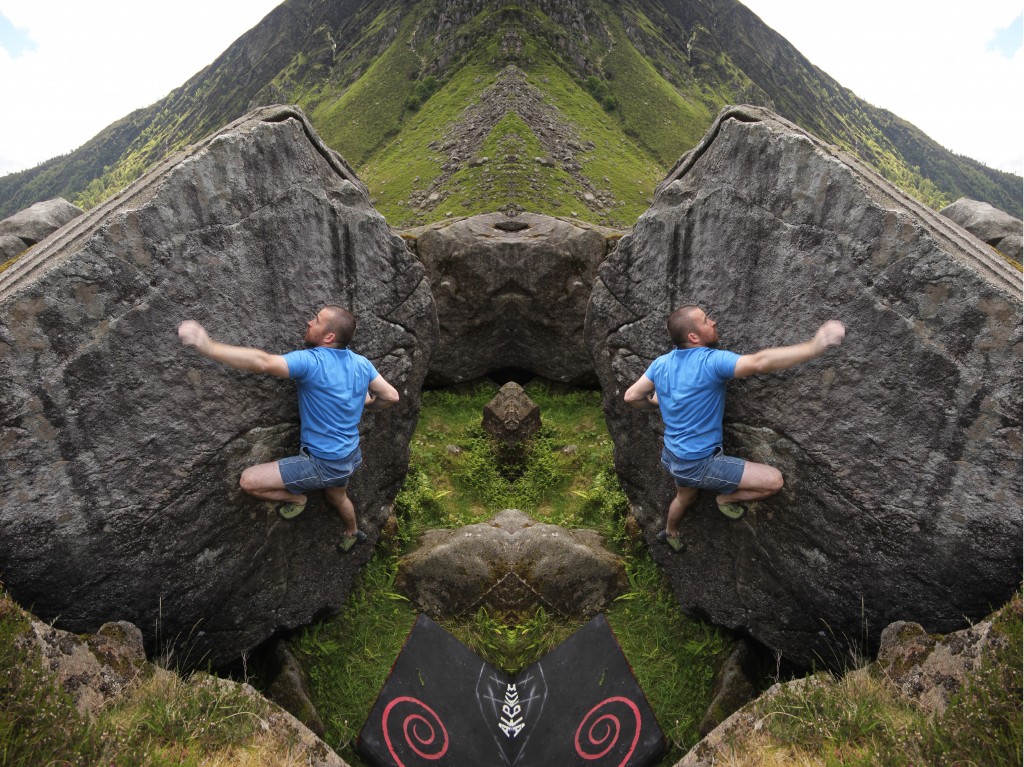 When you consider that problems on rock are random, i.e. there is no reason why they would favour movements with one hand over the other, then it’s apparent that severe asymmetry could be a problem. I don’t think that asymmetry is as much of an issue indoors as routes and problems are designed to be climbed so the routesetters presumably set moves that favour right handed climbers. It would probably be possible to test this theory by comparing the ratios of left to right handers at the top level in indoor and outdoor climbing and see if there is any significant difference.

It’s not just dynamic hand moves where a climber may have a preferred side, I find with mantels that I much prefer to push down with my right hand and my left foot and when faced with a mantel on the right side I still use my right hand to push down. Inspecting the rubber on the toes of your climbing shoes may also give some idea of how dominant one foot is?

The main principle of training for climbing is to work your weaknesses. The first step in this is to identify them. Unfortunately most walls don’t have a system or mirror board but it still should be possible to get some idea of how balanced you are by reflecting on what moves you have struggled on in the past. Keep the idea of symmetry in mind as you climb and you may encounter some examples of it.

About a year ago I got it into my head that I wanted to be able to juggle four balls which requires juggling two in each hand. Initially I couldn’t juggle 2 in my left hand to save my life, but after a decent bit of practice I’m now pretty much as good on either side and the left side feels more natural and instinctive. Read into that what you will but I feel that it should be possible to improve one’s bad side, it mightn’t be possible (or necessary) to become ambidextrous but I think some time focussing on one’s bad side should pay dividends.

Currently a lot of the focus of handedness is on strength and power but I think that in the future the focus will shift to movement. Rather than system boards with lots of relatively simple holds we will see large symmetrical features made up of volumes and the very large custom holds. There might even be seperate stations for different movements ie, a dyno feature, mantel rail etc.