The Sligo coast (and the 4.5km strip of County Leitrim that meets the sea) is one of the more gentle sections of the Wild Atlantic Way. Here the green fields run straight down to the shore and cattle graze on the sweet and salty grass.

The mountains that lie a short distance inland are very different in character to those to the north and south, but are equally as impressive. The geological foundation is limestone that has been eroded to leave vertical cliffs with flat summits, a form that is exemplified in the iconic profile of Benbulbin.

Also inland are a number of worthwhile diversions including the wooded shores of Lough Gill near Sligo Town and the beautiful valley of Glencar in Leitrim with its spectacular waterfalls. Sligo is world-famous for its surfing, with spots like Strandhill, Mullaghmore Beach, Easky and Enniscrone recognised internationally as having some of the best surf in Europe.

One of my favourite discoveries while researching Exploring Ireland’s Wild Atlantic Way was the Glen, I can’t remember where I first heard of it but it sounded intriguing and eventually managed I found out where it was, information was scarce and it took a bit of detective work.  Truly a gem, the Glen is a narrow canyon that runs for just under a kilometre 54.2482, -8.5764. Almost completely hidden from view and difficult to find, it’s a peaceful, still place with a lush, rainforest feel. The vertical limestone walls and the thick vegetation nearly completely obscure the sky.

To find it, follow the Wild Atlantic Way south out of Strandhill. After 3km take the left turn signposted for Knocknarea. Drive 600m up the hill and park in the scenic layby on the right 54.2481, -8.5733. Walk back down the hill. After 300m look out for a small well on the right, the entrance is directly opposite this. 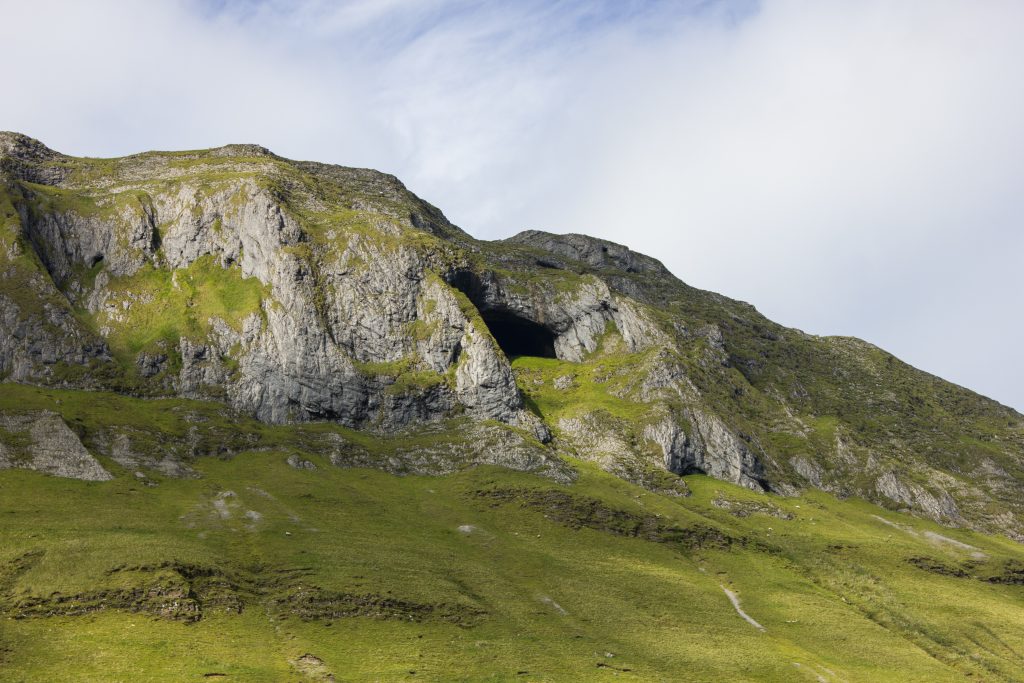 The Gleniff Horseshoe in the Darty Mountains is surrounded by immense limestone cliffs. From the highest point of the road a dark shadow looms high up on the western side of the valley. This vast cavern is the legendary Diarmuid and Gráinne’s Cave, the reputed the last hiding place of the ill-fated lovers.

The cave is accessed by a hard and dangerous climb up the grassy slopes from the road. Be warned the climb cave isn’t for the faint-hearted. It’s a long slog that gets steeper near the end, the ground can be loose and very slippery in wet weather. There may be a rope in place near the end but don’t trust your whole weight to it. Please be careful! Also, the access situation in the valley is tricky with some farmer’s objecting to walkers crossing their land so pay attention to the signs and if asked to leave you must do so.

If you manage to survive the climb then you will be rewarded with a spectacular view across Donegal Bay to Glencolmcille. 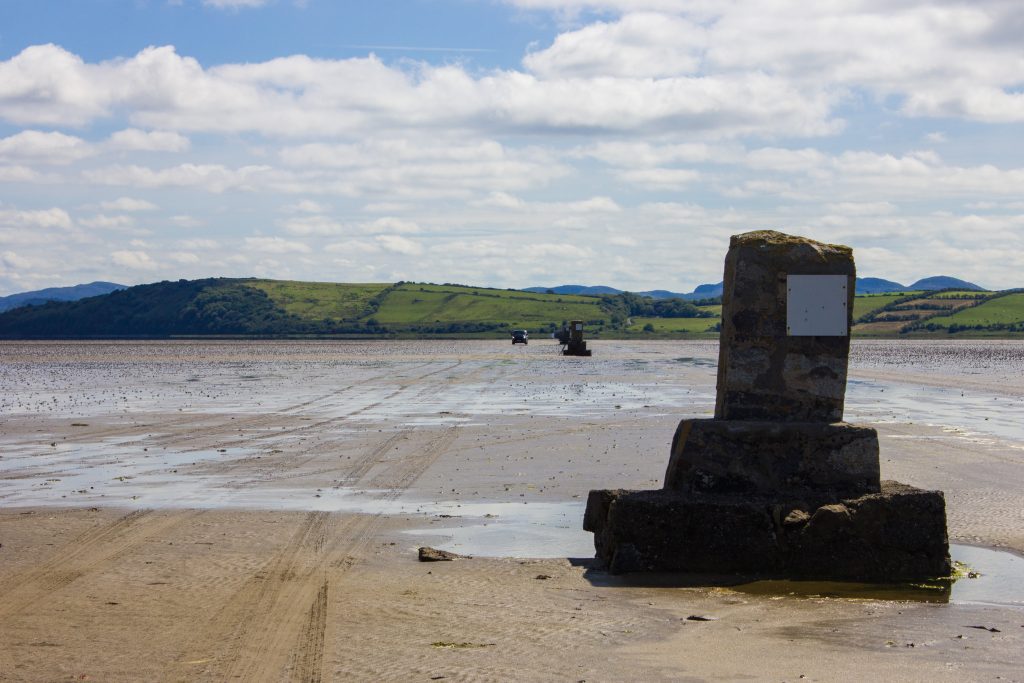 Twice a day, every day the tide covers the vast sands that surround the  Coney Island, temporarily cutting it off from the mainland. But once the tides recede it’s possible to drive, walk or cycle across the sand. This unusual access gives the island a magical remote feel and makes it one of very few Irish islands (the other well know example is Omey Island in Galway) that can be visited without a boat at low tide.

The 160 hectare Coney is the largest and the best known of the three islands that lie off the northern coast of the Coolera Peninsula, it is very popular with holidaymakers during the summer. The only facility on the island is McGowan’s pub 54.3003, -8.5797. There are two nice beaches, a small one by the pier 54.3020, -8.5801 and Carty’s Strand, on the west side 54.2995, -8.5936. Caution is required if you are going to swim as there can be dangerous currents. Enquire locally.

Coney Island, which translates as ‘The Island of Rabbits’, gave its name to the American Coney Island. In the 18th century the captain of a merchant ship, a Sligo man, noting lots of rabbits on the New York island, named it after his own Coney Island back in Sligo.

Access to the island is by boat from Rosses Point, or by driving at low tide over the 2.5km causeway across Cummeen Strand 54.2795, -8.5522. To find the start of the causeway follow the Wild Atlantic Way towards Strandhill from Sligo Town. After 4km turn right and follow the road. The crossing is marked by 14 stone pillars. Be warned the crossing is rough on a car, with many deep saltwater puddles and hard, rutted sand.

It’s essential to plan ahead before crossing and ensure there you allow yourself enough time to time to get back to the mainland. Between April and October the RNLI offers tidal information for Coney Island, text “Coney” to 53600 (or to 81400 from UK mobiles) to get the best crossing times subject to good weather conditions.

Raghly is a tiny headland that juts out into Sligo Bay. Apparently the easy 2.2km loop around its narrow roads was one of Yeats’ favorite walks. The views over Benbulbin, Knocknarea and Sligo Bay from the small harbor are excellent.

To get to the start, continue along the road past Lissadell House, following signs for ‘Raghley‘ until you reach the narrow neck of land. Park here on the right 54.3311, -8.6472 and take either turn at the junction. Both will bring you in a loop around the headland.

High up on the northern slopes of the Glencar valley lurks a waterfall known as Sruth In Aghaidh An Aird. The name translates as ‘stream against the height‘ which refers to the fact that when the wind blows from the west the water appears to rise back up the cliff (see some videos of the waterfall in action here). The waterfall, also known as The Devil’s Chimney, falls from the summit plateau of the Darty Mountains for 150m which makes it 29m taller than Powerscourt Waterfall in Wicklow – generally considered the tallest waterfall in Ireland. However, as the Devil’s Chimney doesn’t flow during long spells of dry weather (which are quite rare in fairness) it doesn’t qualify as the tallest in the country.

A pleasant trail leads steeply upwards through native woodland to the base of the waterfall. It’s a 1.8km (round trip) signposted walk starting from the northern shore of Glencar Lough, 1.5km west of the Glencar Waterfall carpark 54.3405,-8.3930.